For exploring sea caves and tide pools, Wipeout Beach is the place to go. It’s a long, sandy stretch of beach located just south of the Children’s Pool. Low tide is the best place to explore here, as most of the marine life is covered when the tide rises. The round, curved pools of marine life are popular for budding photographers, especially during sunset. Because these La Jolla tide pools are so off the beaten path, they are rarely crowded and make for a fun family adventure. Just remember to wear closed-toed shoes!

As one of of the smallest and more ‘hidden’ beaches in La Jolla, Boomer Beach is tucked away just south of La Jolla Cove. It’s a big favorite for bodysurfers because of its powerful surf and lack of surfers and boogie boarders (both are prohibited). It’s possible to catch some sun while laying out on the sand here, but swimming can be difficult for even those more experienced. This is the perfect spot to have a picnic, enjoy the beach, and watch the bodysurfers from shore.

This La Jolla beach is perfect for checking out tide pools and looking for seashells. Located at the south end of Ellen Browning Scripps Park, this beach is easily accessible via a staircase from the street; though it’s rarely crowded. This unusual beach is made up of only a small area of sandy shore, but it is a great place to wander around and look for shells and during low tide, a small tide pool area and plenty of sea life is visible.

Marine Street Beach is more secluded than other La Jolla beaches, but still easily accessible at the west end of Marine Street and Sea Lane. Sunbathing, scuba diving, and surfing are popular here since it’s less crowded than neighboring Windansea Beach. It’s actually a legendary spot for surfers because of its thunderous surf, and can be very difficult to swim at if you are not as experienced in the water. It is the perfect beach to visit on a sunny summer day, though, as there is plenty of sand to spread out on and get some sunshine.

Torrey Pines State Beach lies at the bottom of the State Reserve and hiking trails, which are incredibly popular and crowded on most weekends. The sandy beach is located just north of downtown La Jolla and south of neighboring Del Mar, making it easily accessible if you’re coming from La Jolla Village. Like many La Jolla beaches, Torrey Pines Beach is very family-friendly and has several amenities. This is a great area to get the best of both worlds: hit the trails first and then head to the beach!

As its name suggests, the Children’s Pool was originally constructed to serve as a protected swimming area for young children. The sea wall that encircles the beach stops rough surf from entering the area, making it easy to wade in and out of the water. In recent years it has been overtaken by the area’s seals and sea lions (much to the chagrin of many locals)! Despite the presence of the sea lions, Children’s Pool is a beautiful spot to take in the scenery. 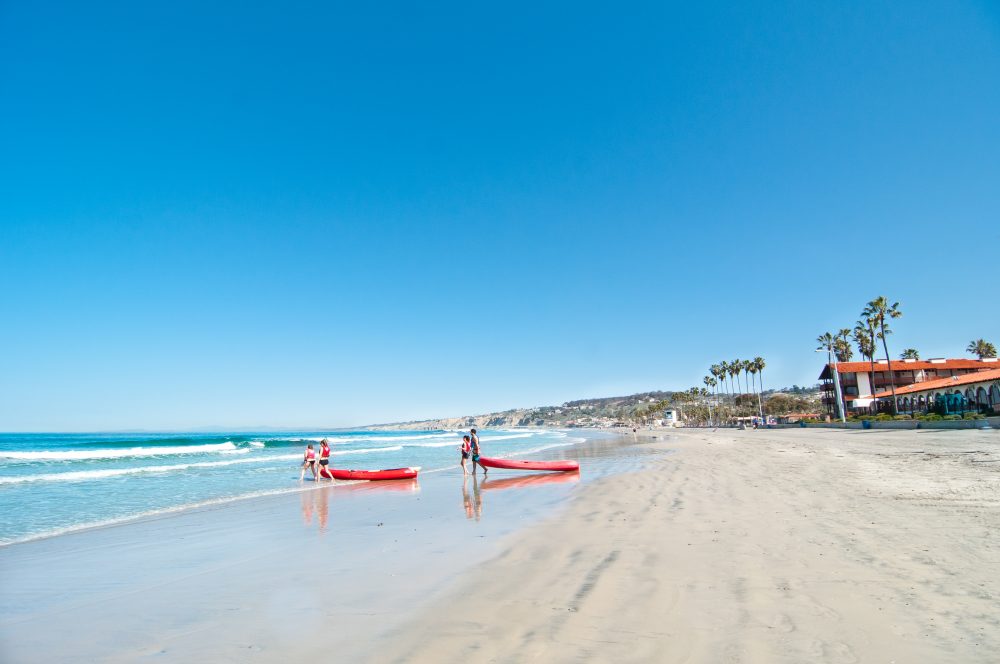 La Jolla Shores is a beautiful, sandy beach spread out along the coast just south of downtown La Jolla and La Jolla Cove. There are several family-friendly activities available there at Kellogg Park: a large playground, picnic tables, a grassy area with barbecues, and bonfire pits right on the beach – and don’t forget the water activities! Kayakers, boaters, scuba divers, and surfers are all welcome here. Downtown La Jolla Shores is just a 5-minute walk away, where you’ll find plenty of shops and restaurants.

La Jolla Cove is definitely the most well known beach in La Jolla – and arguably the area that our beautiful little coastal town is known for. Its beautiful, crystal-clear water and warm swimming temperatures year-round make it one of the most picturesque options for enjoying a day at the beach. There are a number of activities and things to do at La Jolla Cove, including snorkeling, diving, watching the sea lions, checking out sea caves, and kayaking. Visitors can spend the day down at the beach, or in the grassy shade of Ellen Browning Scripps Park.

Welcome to Windansea Beach, where the sand is soft, the water is stunning and the surfers abound. There’s a good reason the locals frequent often and why so many San Diego wedding parties come to have their photographs taken here; its picturesque landscape creates the perfect setting. Dogs are allowed here after 6 pm. During fall and winter time, they can come earlier starting at 4 pm.

Blacks Beach in La Jolla is famous for more than its peaceful vibe, great surf and smooth sand. It was the first nude beach in America, starting in the 1970s, and is still the largest nude beach in the US. However, for those who like to keep things modest, this secluded spot is not 100% bathing suit optional – it’s just one part of it.