If you’ve been to La Jolla Cove in southern California during the summer, you’ve probably heard about the leopard sharks! Swimming and snorkeling with these incredible creatures is a popular summertime activity with both locals and tourists alike. And while the word ‘shark’ may sound a little scary, leopard sharks are actually completely harmless to humans and offer a fun way to explore the underwater world off the shores of La Jolla. Here’s everything you need to know about leopard sharks!

Leopard sharks (Triakis semifasciata) are a member of the Houndshark family and have quite distinctive features; including large dark spots and saddle type markings. The sharks have a broad, short snout, triangular pectoral fins, a short dorsal fin, and a notched, asymmetrical tailfin. On top they are usually a silver or bronzed-gray, fading to white underneath, with distinct dark spots and blotches on its back, sides, and pectoral fins.

They can live up to 30 years, and take more than a decade to reach maturity. They generally only grow to about four or five feet (in rare occasions they can reach up to seven feet) and the heaviest ever recorded weighed in at a whopping forty pounds.

The leopard shark is found in continental waters, both nearshore and offshore, and their preference is for waters that are cool to warm in temperate or sandy/muddy bays or estuaries. They love sand flats, mud flats, and rocky bottom areas near reef sites and kelp beds – which explains their love of La Jolla!

The sharks are usually found near the bottom of shallow water, and they are exceptionally strong swimmers. Oftentimes, they are joined in a school of others that include the Smooth-Hound, gray Smooth-Hound, or the Piked Dogfish.

They’ve been found all across the Eastern North Pacific, from Oregon to the Gulf of California and Mexico.

Leopard sharks are harmless to humans. Only one attack has ever been recorded, and it happened in 1955 in Trinidad Bay, California. Fortunately, the diver was not seriously injured.

The leopard shark has recently become a protected species in California and Oregon waters so that they are not overfished. Sports anglers, spearfishers, and small-scale commercial line fisheries are typically the ones who go after the shark.

BE THE FIRST TO KNOW ABOUT LA JOLLA EVENTS, STORE & RESTAURANT OPENINGS, & MORE!

Female leopard sharks travel to La Jolla each summer to mate with males and spawn their young, which is why there is such a large influx of them at the beginning of summer (around June).

The female leopard becomes mature at ten to fifteen years of age and males at seven to thirteen years. During the annual breeding season, schools of these sharks move from deeper water into nearshore shallower water. Fertilization is internal. The type of reproduction is called aplacental viviparity or ovoviviparity. The fertilized eggs hatch inside the female’s body and pups are born live. After a ten to twelve-month gestation, seven to thirty-six pups about 17.8 cm (7 in) in total length are born. They are independent at birth, but usually stay in shallow bays and estuaries before venturing out into deeper ocean waters

Female leopard sharks have been observed giving birth in a variety of habitats along the California coastline from eel grass to sandbars and the open ocean. 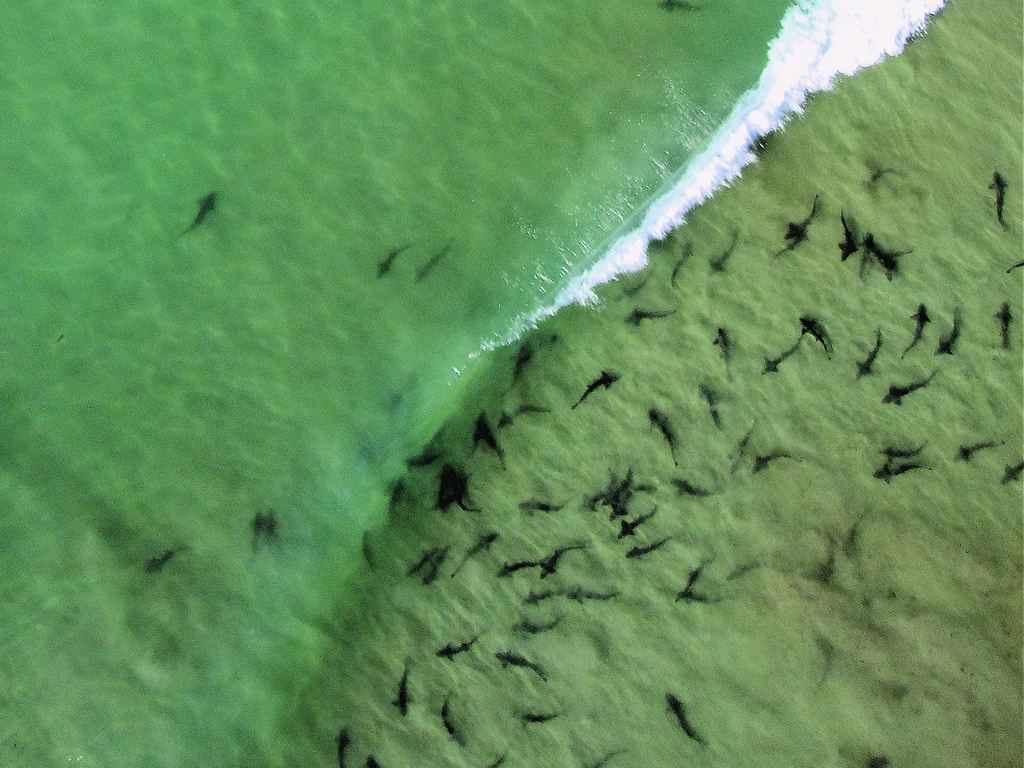 Leopard sharks congregate by size and sex in large nomadic schools. The schools appear and disappear within a few hours. Schools follow the tide as they feed, moving closer to shore as the tide comes in and then swimming away before it recedes. In addition to feeding, the movement may be influenced by temperature, salinity and amount of dissolved oxygen. Large schools have even been observed in the surf zone. They are also known to form schools with California round rays and with sevengill sharks, and smoothhound sharks. The latter are close relatives.

The California Department of Fish and Wildlife closely manages the leopard shark fishery within state waters. Use of gill nets in waters typically inhabited by these sharks is prohibited. The recreational fishery for leopard sharks is open year-round and coast-wide to diverse and shore-based anglers. The fishery is open to boat-based anglers year-round in designated areas only. Outside these areas, it is open seasonally between January and June.

Currently listed internationally as Least Concern, overfishing, loss of shallow water nurseries, and pollution of these areas from runoff are threats to these sharks. They have been found to contain high levels of mercury attributed to either water quality or ingestion of food items containing mercury.

Snorkeling with the Leopard Sharks

The end of August and September are usually the best times to see La Jolla Leopard Sharks, as this is towards the end of the mating season and there are higher numbers of sharks. The ideal time to go is during the day, when there are calm waters and when it’s sunny (as they will be easier to spot).

La Jolla Shores, where the water is warmer and shallower, is usually where snorkelers and swimmers venture out to see and swim with the leopard sharks. It’s easier for them to search for food in the sand and kelp forests, which are protected by the La Jolla Underwater Park Preserve. Their diet consists mostly of smaller shellfish; including clams, crabs, shrimp, squid, and fish eggs.

During peak season, you can simply swim out into the water at La Jolla Shores and see the leopard sharks – they will often be that close to shore. Wade out up to your knees or hips, and you’ll see them swimming around your feet (which is quite an experience!). There’s no reason to be scared of these little guys, as they are completely harmless to humans and won’t bite or bother you.

There are a few different ways to really see the La Jolla Leopard Sharks. You can:

To learn more about activities and fun things to do at La Jolla Shores and La Jolla Cove, visit our guides section!