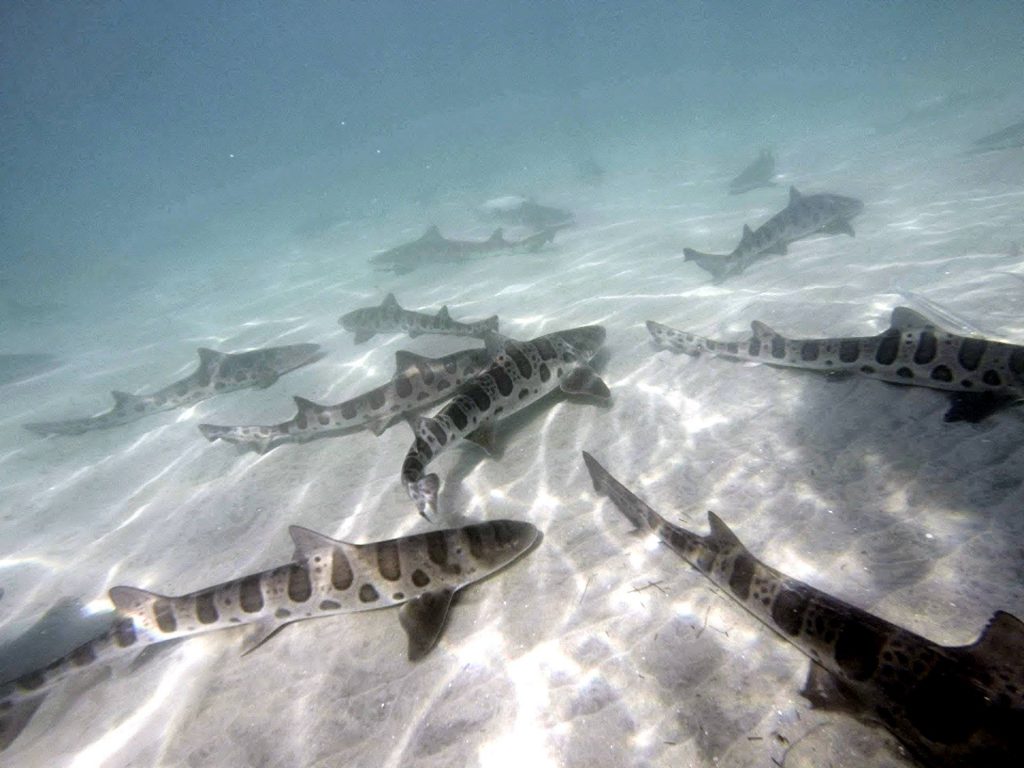 Every year, thousands of leopard sharks head to the shores off the coast of La Jolla Shores to mate and then hatch their young. The warmer waters here provide an ideal temperature to incubate, and the sharks will typically stay for up to six months to complete the process.

The La Jolla leopard sharks are beautiful – and harmless – and snorkeling alongside them makes for an incredible afternoon out with the family. These little guys are hard to miss, and are distinctively marked with dark brown spots on a silvery, gray background that resemble a leopard print.

Here’s the rundown on how to see the La Jolla leopard sharks; from where to go, when to go, and how to do it!

What time of the year can I see the La Jolla Leopard Sharks?

The leopard sharks are typically in their largest numbers from early June through the end of September or October, when thousands migrate to La Jolla Shores for their mating season. During the rest of the year about 100-200 local leopard sharks can still be seen, and some companies hold snorkeling tours through December or even year-round.

The leopard sharks congregate in the warmer shallow waters near La Jolla to look for food and find a mate; though they are a bit wary of humans, they typically keep to themselves and will gladly share the water with (respectful) swimmers and snorkelers.

When is the best time to visit?

End of August and September are usually the best times to see La Jolla Leopard Sharks, as this is towards the end of the mating season and there are higher numbers of sharks. The ideal time to go is during the day, when there are calm waters and when it’s sunny (as they will be easier to spot).

Where is the best place to see the leopard sharks?

The La Jolla leopard sharks congregate at La Jolla Shores,  where the water is warmer and shallower. It’s easier for them to search for food in the sand and kelp forests, which are protected by the La Jolla Underwater Park Preserve. Their diet consists mostly of smaller shellfish; including clams, crabs, shrimp, squid, and fish eggs.

During peak season, you can simply swim out into the water at La Jolla Shores and see the leopard sharks – they will often be that close to shore. Wade out up to your knees or hips, and you’ll see them swimming around your feet (which is quite an experience!).

There’s no reason to be scared of these little guys, as they are completely harmless to humans and won’t bite or bother you. Be respectful of them and you can expect them to do the same for you!

How can I snorkel with the La Jolla Leopard Sharks?

There are four different ways we recommend if you’d like to snorkel with the La Jolla leopard sharks.

5 Safety Tips and Guidelines for Swimming with Leopard Sharks