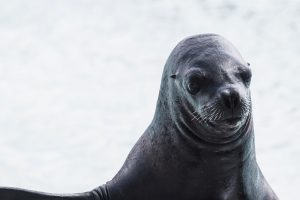 Normally popularity is a good thing.

For La Jolla seals they became too popular for their own good.

The seals, found at La Jolla’s Children Pool, became a tourist attraction in 2010 and on March 11, 2016 This American Life published a podcast about them.

The podcast episode entitled, “When the Beasts Come Marching In” breaks down how marine activists and La Jolla residents engaged in a bitter struggle to see who gets access to the seals.

Despite both sides eventually calming down, the podcast taught us a lot of useful information about La Jolla seals and sea lions.

Here’s 5 important things we learned from the This American Life Podcast. 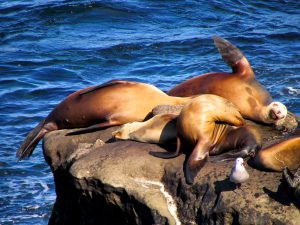 It is not exactly clear when a pup is no longer a pup but most scientists agree that adulthood starts when they are 3-4 weeks old.

During spring harbor seals nurse and raise their pups. Adults, generally females, go hunting and find food. Seals are carnivorous and feed on a variety of squid and other marine animals. Mothers only nurse their pups for about 3-4 weeks then let them fend for themselves.

For now, the harbor seal beach is closed off to the public from December 15th to May 15th. Because of the constant bickering between residents and marine activists, nobody can have access to the beach during pupping season.

Since the rule was made, there have been several attempts to override that decision, however it still stands. The bickering has also died down significantly.

The seals migrated to La Jolla around 2010. Since arriving they made the Children’s Pool their permanent rookery. It serves as a nice location for a breeding ground because there is plenty of food to hunt for their pups.

The rookery is about 150 wide and during 2010 became quite crowded as the seal population grew.

Tourists have easy access to the beach. This poses a big problem for marine activists because residents were often reported as harassing the seals.

The podcast mentions that angry residents called the breeding a “crookery”.

4. La Jolla seals are NOT in danger of extinction

Despite people arguing over the seals, the podcast clarifies that the seals are not even close to extinction.

Despite mammal activists trying to defend seals, researchers discovered that the harbor seal is an animal of “least concern”. That means the seal is in the same danger of becoming endangered as a house rat or pigeon.

Even though this fact became known, it did not stop the angry fighting between residents and activists.

“Flushing” a seal means scaring it back into the water. When seals are flushed (and they often are) they wiggle and stampede toward the water to escape danger. As the seals grew in popularity, they were flushed more frequently.

Local residents were constantly interacting with the seals. Activists soon became aware that the seals attracted too much attention. Brian Pease, one of the main seal activist explains in the podcast explains, “If you flush them, it’s interfering with their biological [process]… it’s just disruptive.” If residents are caught flushing the seals, there’s also a $500 fine from the National Marine Fisheries Service.

It is a violation of the Marine Mammal protection act, a law from 1972 that protects all marine mammals. Activists often video recorded residents who flushed seals and reported them.

The struggle for residents and activists still continues. After the decision to close the rookery to the public the seals are flushed less frequently. Residents can still look at the seals, but from a distance.

Although not a perfect solution, the fighting between two sides has dramatically decreased. The seals still call The Children Pool their rookery. The continue to raise their pups in peace.

Perhaps the episode title, “When The Beasts Come Marching In” describes the humans more accurately than the La Jolla seals.