Theodor Geisel, affectionately known as Dr. Seuss remains one of the most renowned children’s book authors of our time. Theodor and his wife, Audrey Geisel, moved to La Jolla in 1948. They bought an observation tower high atop Mount Soledad which Dr. Seuss would use as his office. 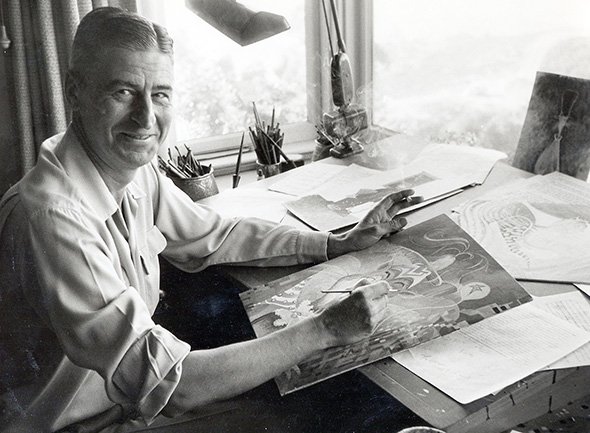 Dr. Seuss at work in his office overlooking the La Jolla coastline.

Overlooking the picturesque view of the La Jolla coastline and the famous Monterey Cypress trees in Ellen Browning Scripps Park, Dr. Seuss would find the inspiration for many of the his most beloved and popular stories. It was during his time in La Jolla that he would write 48 books including “Horton Hears a Who!,” “The Cat in the Hat,” “How the Grinch Stole Christmas” and “Green Eggs and Ham.” 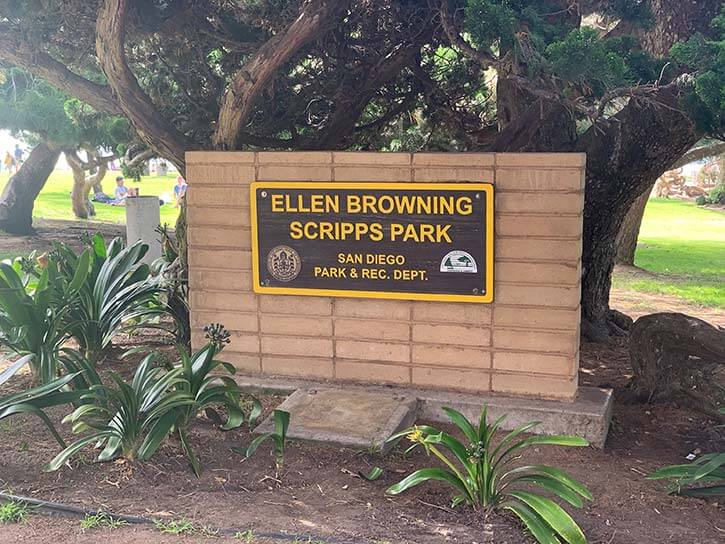 Buy on Amazon
Dr. Seuss The Cat in The Hat Pajamas Set

The “Truffula Tree” a.k.a The “Lorax Tree”

Dr. Seuss famously said that his favorite of all of his books was The Lorax. Calling it straight propaganda, he was notoriously upset about the billboards, homes and condos that threatened his tranquil community of La Jolla. Written at the age of 67 and published in 1971, The Lorax is the story of the ambitious Once-ler who builds a huge, thriving business at the expense of Truffula trees and the creatures who depend on them.

The ‘Truffula Tree’ a.k.a The ‘Lorax Tree’ overlooking the La Jolla Cove hotel prior to it’s collapse in June of 2019.

The real-life inspiration for the fictional Truffula species in the book is called the Monterey Cypress. Formed by the wind and unique to the California coast, one tree in particular is said to have inspired this environmental story about letting the trees grow. 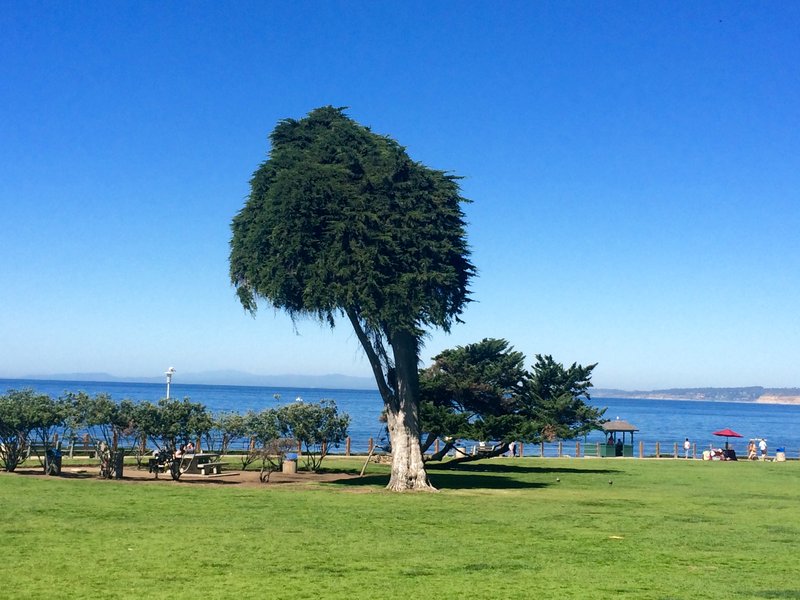 The ‘Truffula Tree’ a.k.a The ‘Lorax Tree’ overlooking the coves of La Jolla prior to it’s collapse in June of 2019.

Estimated at 80-100 years old, the famous tree known simply as ‘The Lorax Tree’ fell in June of 2019. While city officials knew the tree had a termite problem, its collapse at it roots was unexpected and upsetting for those that knew it well. The exact cause of the fall is under investigation and there are talks of replacement. For now the tree has been removed and parts of the tree may even be repurposed. 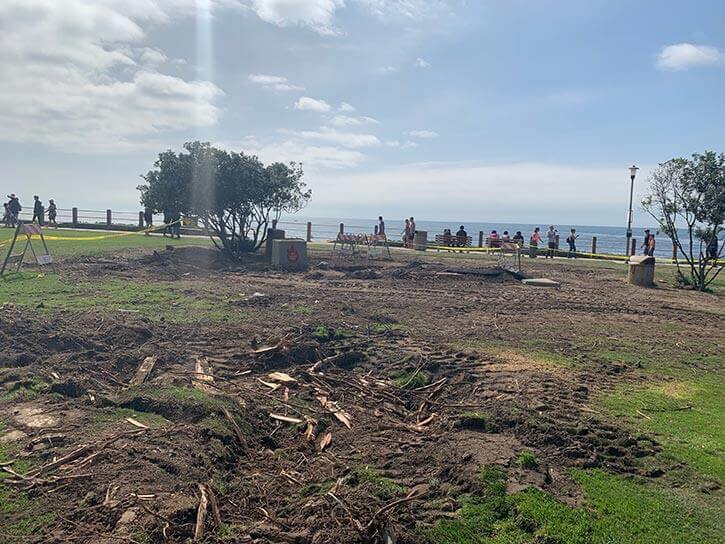 Location where the Lorax Tree stood after it’s removal

Though much of the scenery in La Jolla is reminiscent of Seussian-style illustration, the trees in The Lorax are particularly notable. With a view of the ocean atop one of the many beautiful overlooks in La Jolla ,The Lorax Tree&nbspinspired Dr. Seuss to write a story that will be beloved by children for generations. Adapted into a cartoon in 1972 and a feature length movie in 2012, the famous words of the Lorax himself will outlive the famous Monterey Cypress in Ellen Browning Scripps Park.

I speak for the trees
-The Lorax 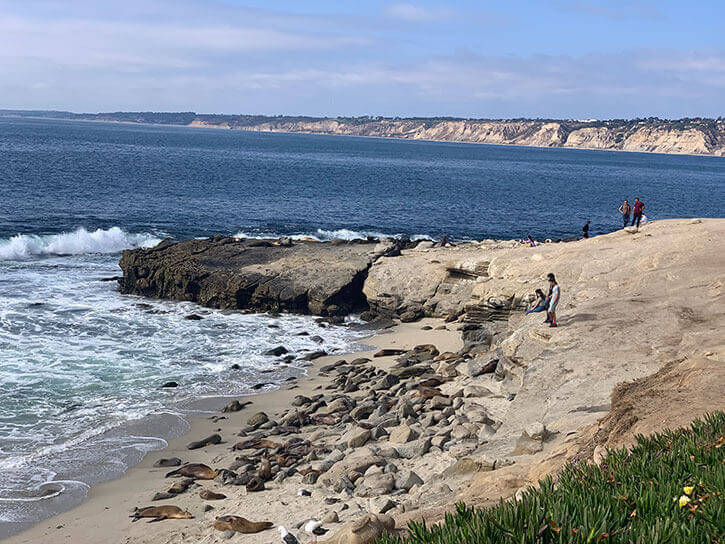 One of the many picturesque views of the La Jolla coastline.

The Spires of The Hotel Del Coronado

Just to the south of La Jolla,you can visit one of Dr. Seuss’ real-life inspirations firsthand: The Hotel Del Coronado.

Dr. Seuss’ painting, aptly titled “I Dreamed I was a Doorman at the Hotel del Coronado,” is a colorful rendering of the 1888 Victorian hotel. It features a beachside setting with sharp angles, whimsical colors,and an eclectic feel. The doorman is just a tiny speck in the middle of whirlwind of activity and color.

The Del’s bright, red-shingled roofs and storybook style make it something of a fairytale castle, something that surely inspired Geisel; he was fond of all things whimsical (in fact, the word ‘Seussian’ is actually in the dictionary!). He could also see the hotel directly from his Tower perch atop Mt. Soledad.

“The Cat in the Hat,” published in 1957, features a rather odd-looking, high-stress personality, disgruntled orange fish. Referred to as Mr. Krinklebein in the TV show, but simply as “The Fish” in all of the books, he was constantly trying to restore order in his home.

As arguably his most famous book, Dr. Seuss only needed to look out into the bay to see his inspiration for this one – the State of California’s colorful and precocious Garibaldi fish. Though found frequently in La Jolla, the bright orange fish is rarely seen in places away from the southern California coast. And interestingly enough, they are usually aggressive defenders of their natural territory – much like its textual counterpart!

“The Fish” character appears in other stories and almost every other Seuss book, and they always play a similar role: an overly nagging, moralistic creature that admonishes any type of wrongdoing. Geisel actually once referred to his book’s fish character as “my version of Cotton Mather,” the Puritan moralist who advised the prosecutors during the Salem witch trials.

In the 1960s, Dr. Seuss drew a series of illustrations titled “La Jolla Birdwomen.” They were gently but decidedly satirical, comparing the many birds of La Jolla with the upper-class socialites in La Jolla – a vehicle for another bit of Geisel’s spicy social commentary.

As one of the few men in town who worked from home, Geisel lightheartedly considered himself a “bird watcher on the social scene, always looking to create gentle spoofs of his chic female friends taken up in their whirl of luncheons, parties, and charity balls.”

The Birdwomen series consisted of eleven paintings with comical titles and equally captivating captions: My Petunia Can Lick Your Geranium, Not Speaking, Martini Bird, Gosh! Do I Look as Old as All That!, and View from a Window of a Rented Beach Cottage to name a few.

One of the more direct titles simply exclaims “Oh, I’d love to go to the party, but I’m absolutely dead.” The subtle social jabs became characteristic of Geisel even in the later years, though other than “The Lorax,” many of them remained less popular than his other, more lighthearted works. 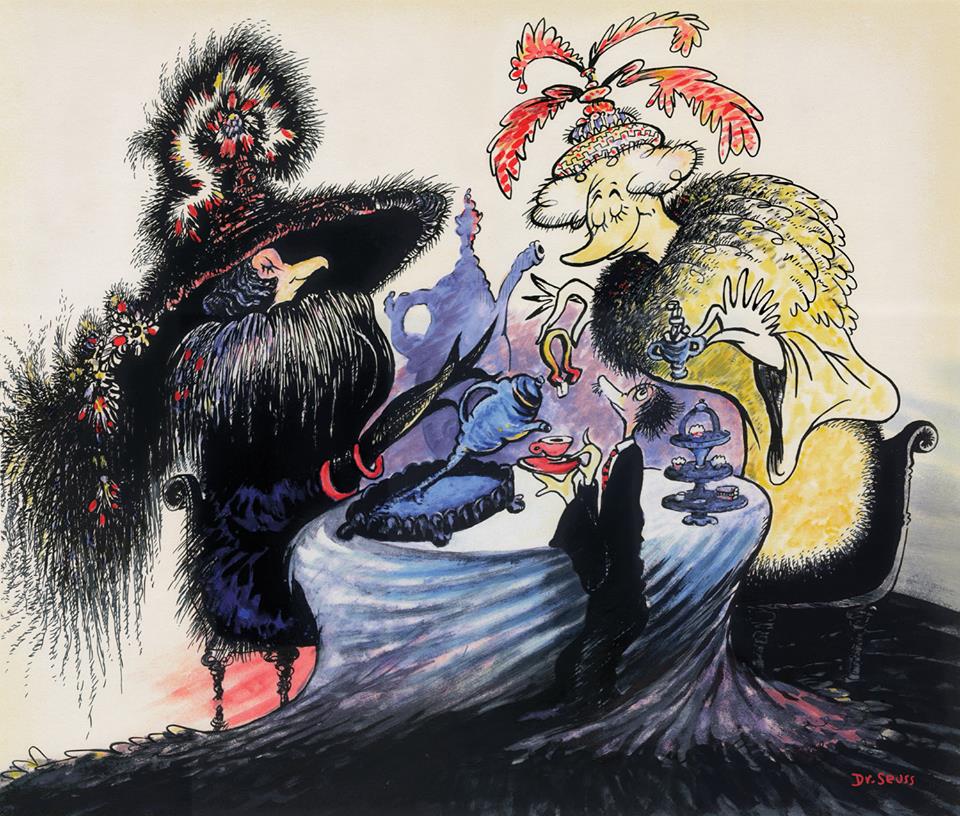 Today, the most notable memorial to Geisel is UC San Diego’s Geisel Library, in La Jolla California. Just outside the entrance visitors will find a life sized bronze Dr. Seuss statue sitting with one of his most beloved characters, a 7’5” tall bronze Cat in the Hat.

The Library was renamed in 1995 (four years after his death) in he and Audrey Geisel’s honor for the generous contributions that they made to the library and their devotion to children’s literature and improving literacy around the world. 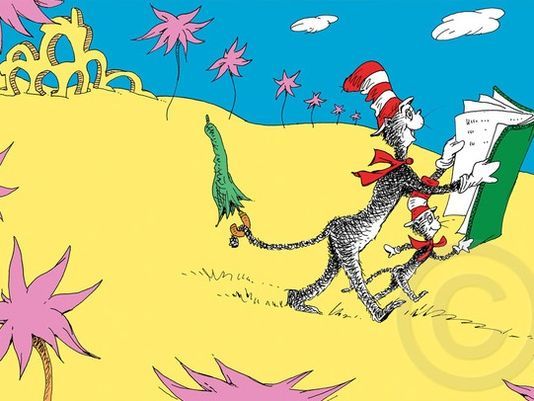 Dr. Seuss called La Jolla home for more than 40 years until his death in 1991. His children’s literature, and all of the creatures within his children’s books, are indelibly etched in millions of children’s imaginations around the world. From “One Fish, Two Fish, Red Fish, Blue Fish” and “The Cat in the Hat” to “The Lorax” and “Yertle the Turtle,” Seuss has truly captured the whimsical, fantastical world of a child’s imagination.

Dr. Seuss won a special Pulitzer Prize in 1984, a testament to his enduring legacy. His children’s books would be incomplete without his works of art, and his ties to San Diego and La Jolla California are indisputable. Dr. Seuss birthday is celebrated on March 2nd every year, a great time of year to visit La Jolla and explore the inspirations of Dr. Seuss. From the quote on the Coast Walk Trail to his very own art exhibit at the Legends Gallery, you might say Dr. Seuss and La Jolla go together like…